A New Horizon is a permanent, site-specific sculpture located in an undeveloped subdivision near the rural town of Tome-Adelino, New Mexico, 40 miles south of Albuquerque. The sculpture consists of a series of cast concrete letterforms, each 1 ½ ft. tall by 3 ft. deep with an average width of 2 ft., spelling out the word “HORIZON.” The concrete was mixed on-site incorporating sand and stones from the site with water and white Portland cement.

The site was originally acquired in a real estate scam and remains, along with surrounding properties, in a state of limbo: impractical/illegal to develop but impossible to protect as a natural resource. Geologically the site is part of a bajada, or merger of numerous alluvial fans composed primarily of sand and small smooth stones, overlooking verdant agricultural land along the Rio Grande.

Locally “Horizon” has negative connotations as the name of the now-defunct land corporation that acquired the Tomé Land Grant, subdivided it, and sold the unimproved parcels to tens of thousands of unsuspecting consumers. The sculpture is in part a reminder of that history, but I also wanted to reclaim the word horizon and return to it some of its ambiguity and poetry by pointing to the slippage between language and materiality.

Horizon derives from the Greek horizon kyklos, meaning “separating circle,” from the verb horizo, “to divide,” or “separate”, and that from horos, meaning “boundary,” or “landmark.” Metaphorically horizon is associated with the future: filled with possibility and the unknown. It is a place we head toward but never reach. And so horizon also suggests a journey or process. As an earthwork A New Horizon converts an idea into a place—a pause in the journey, an interstice in the landscape and in time—a thing that marks the space between events.

Attendees were invited to make “dumbballs,” baseball-sized, concrete spheres first developed by artist David Ireland. Dumbballs are formed by tossing wet concrete back and forth as it hardens, using one’s gloved hands as the mold. “Desert Dumbballs” are made of the same site-specific concrete as A New Horizon.

A New Horizon was commissioned by Earthbound Moon. “Llano Stories & Desert Dumbballs” was part of High Desert Test Sites 2013. In addition to the event participants I would also like to thank: Alex Clausen, Carson Murdoch, Lee Pembleton, and Amy Sampson of Earthbound Moon; volunteers, Ven Voisey and Matt Weaver; and the Tomé Art Gallery for their support and assistance with this project. 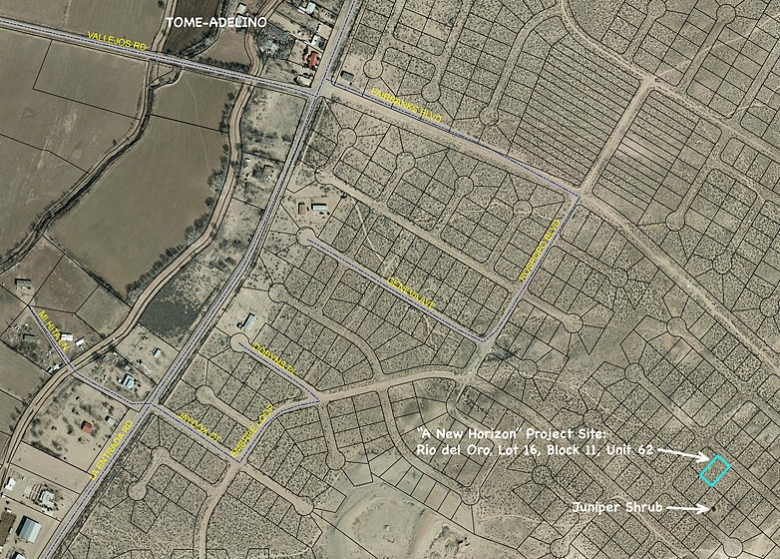 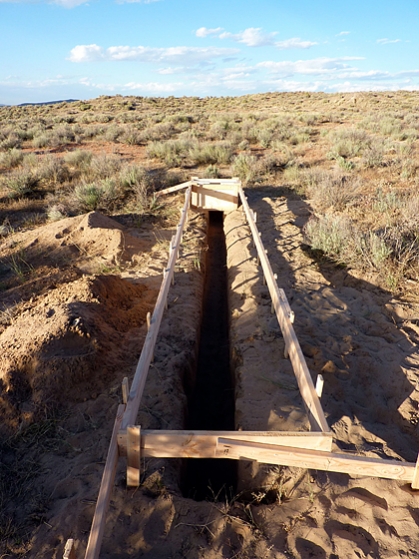 The formwork frame and trench for the concrete footer. 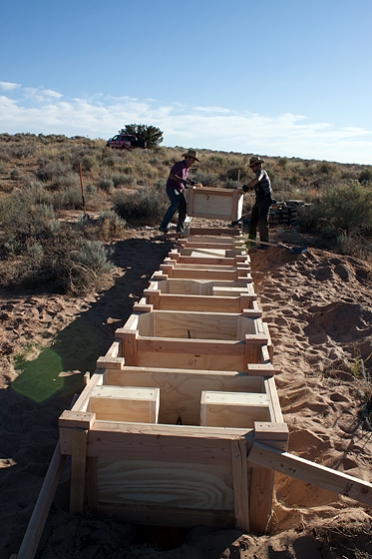 Setting the forms for the letters into the formwork frame. 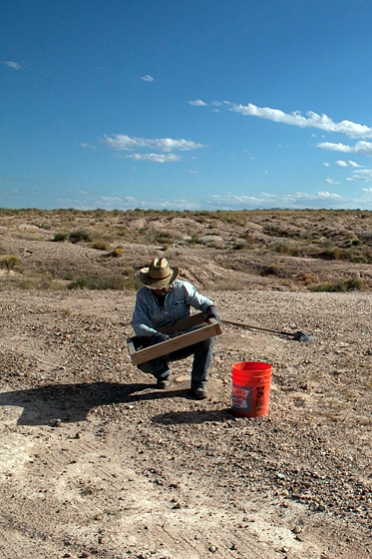 Sifting aggregate for the concrete mix. 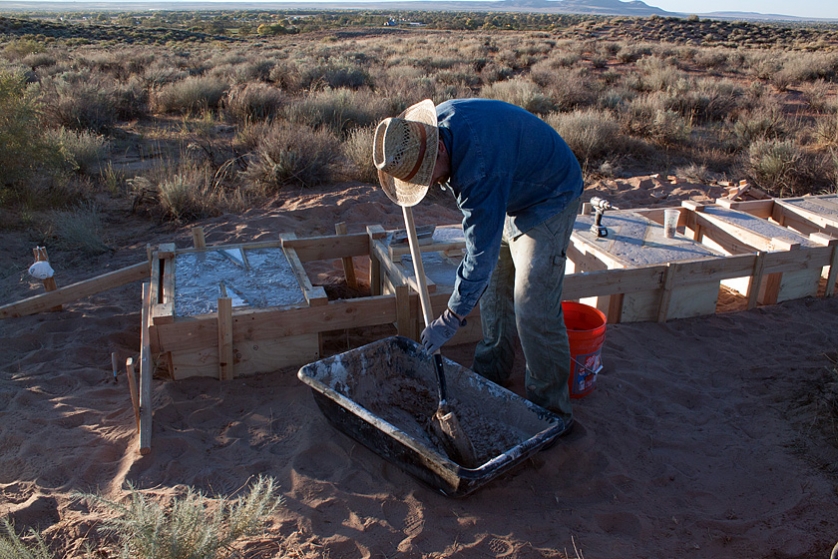 Pouring the last of the concrete into the "N" form. 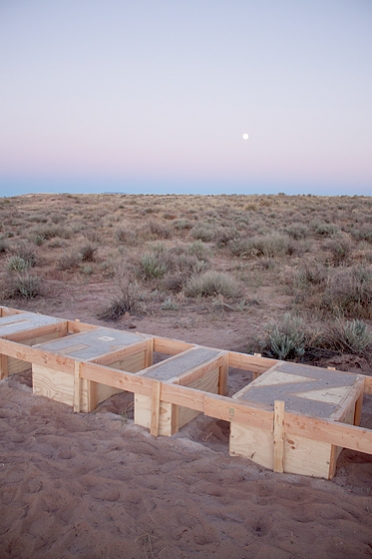 The concrete sets-up under a full moon. 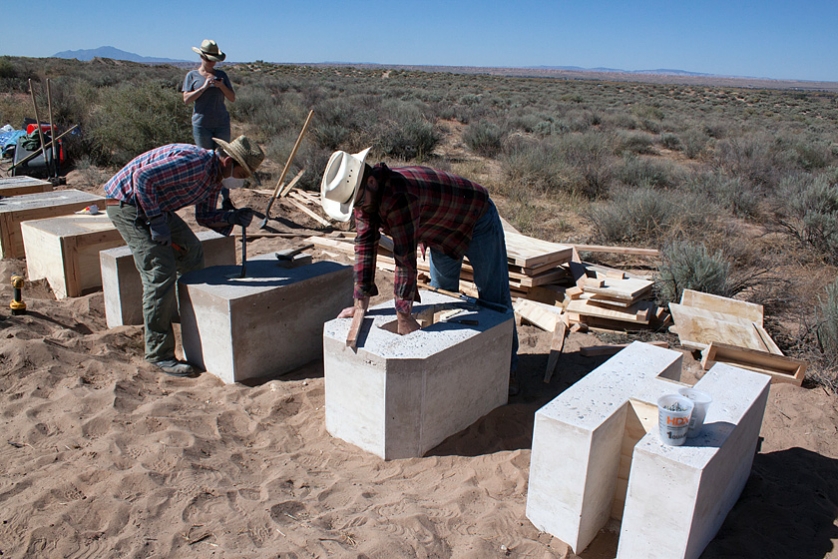 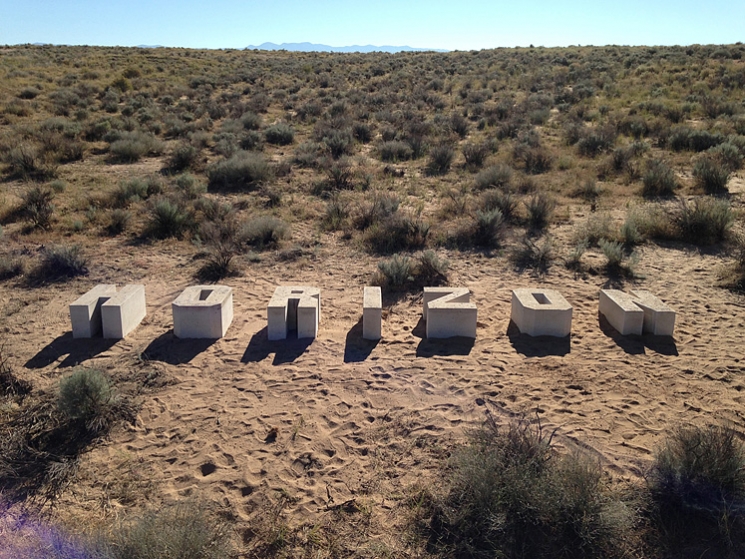 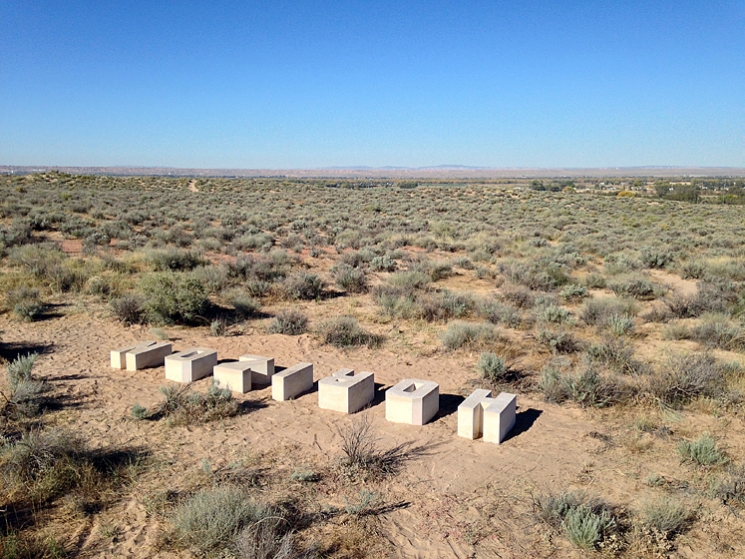 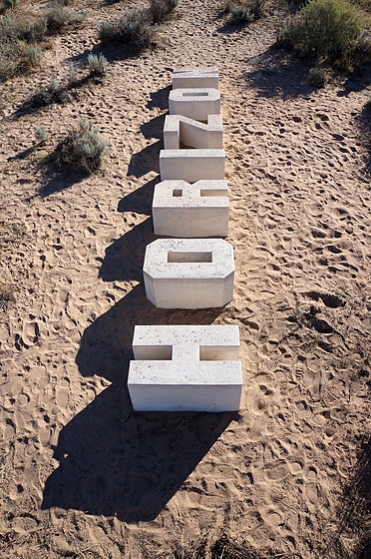 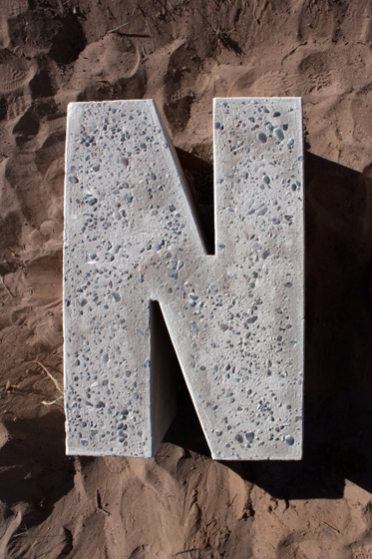 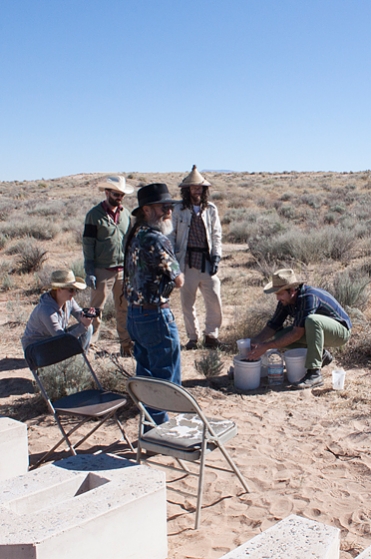 Mixing concrete for the Dumbball demonstration. 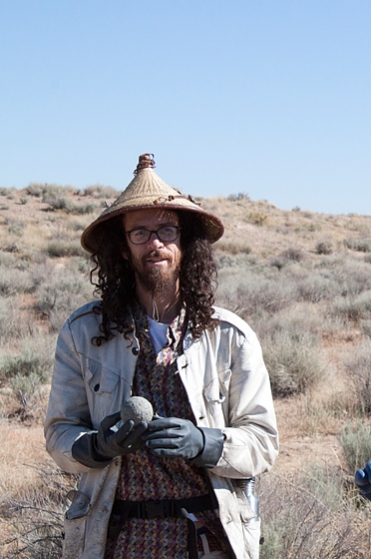 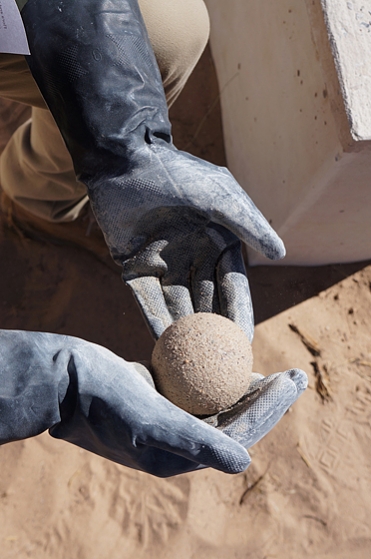 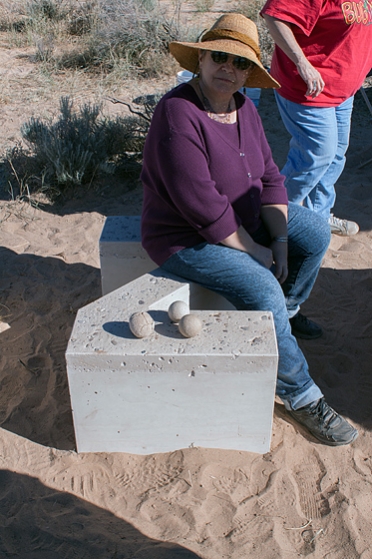 Emilie with some of the completed Dumbballs. 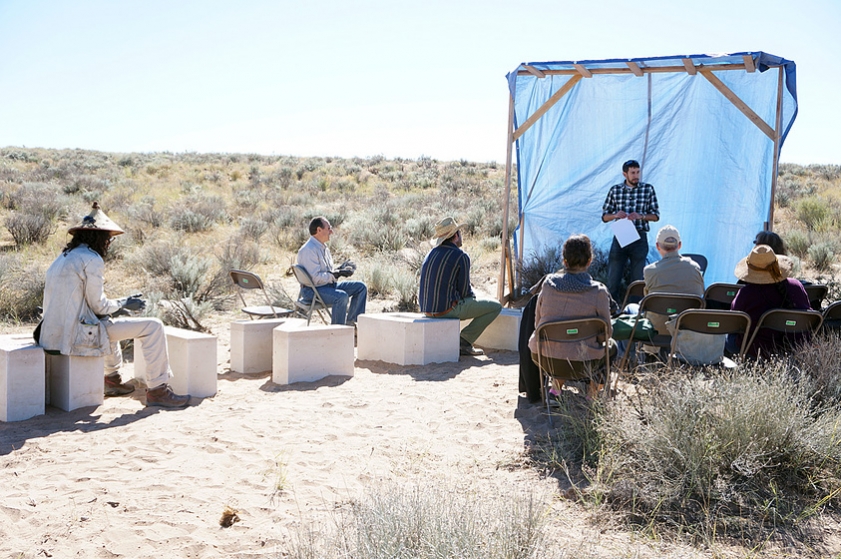 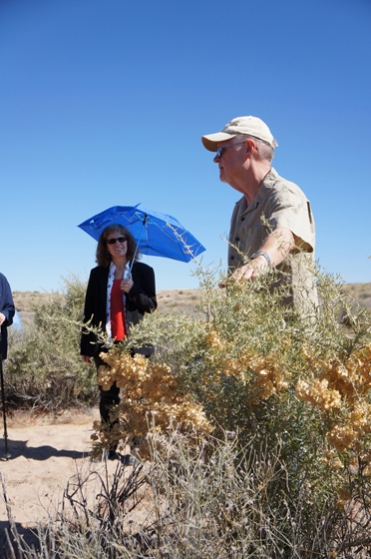 Listen: Ted Hodoba leads a tour of the local flora. 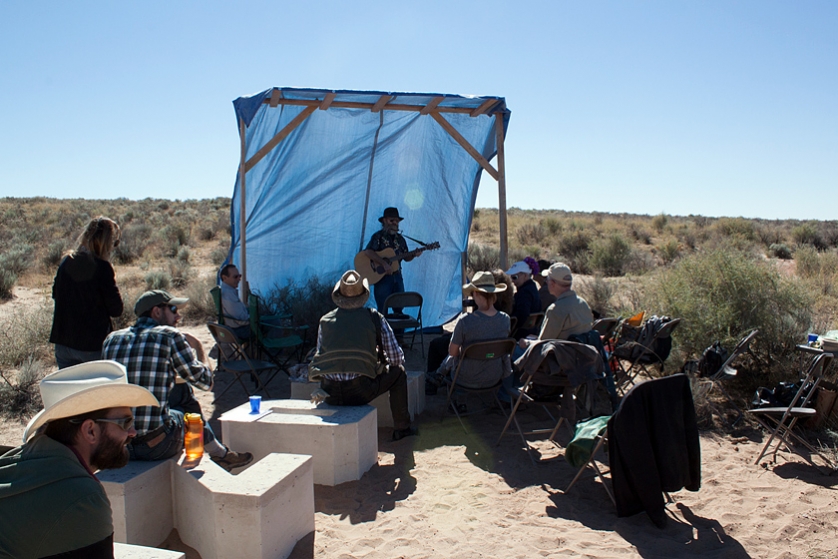 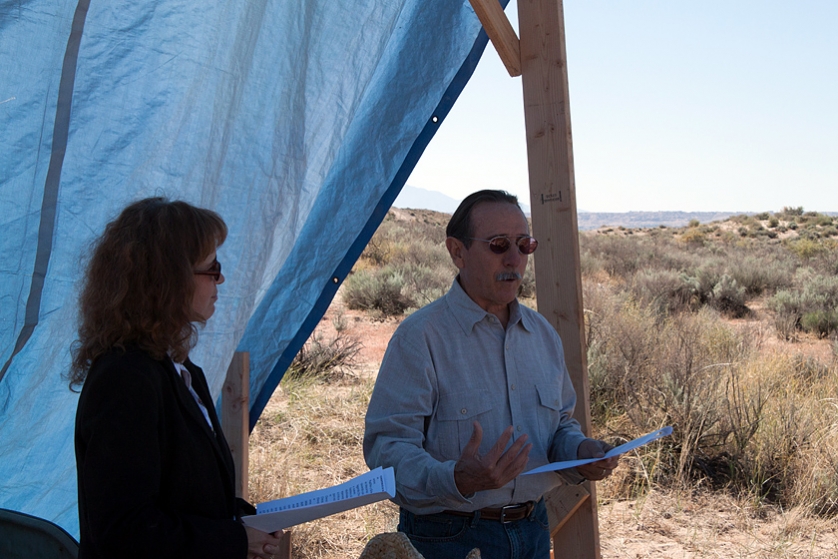 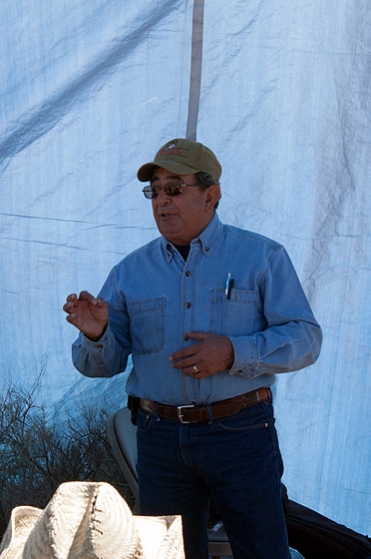 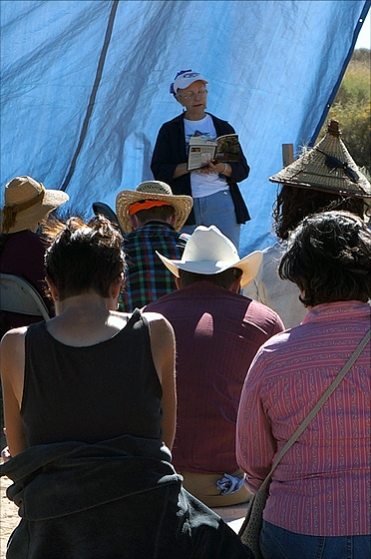